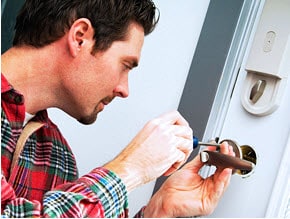 Imagine your front door lock has been working improperly and you finally decide to get it repaired. You scan the phone book and find a company that appears local. They give you a reasonable estimate, but after completing the job, the two technicians who arrived in an unmarked car present you with a bill many times the quoted price and demand cash payment.

It may sound outrageous, but that’s exactly what Laura Gold of West Newton, Mass., says happened to her.

It’s similar to scams that have befallen consumers across the nation, according to numerous lawsuits, news reports and warnings published by government agencies and trade associations.

Gold says she was duped by a company called Dependable Locks after deciding to hire a locksmith to fix a malfunctioning lock on the front door of her home. She called what appeared to be a local listing in her phone book and received a $150 estimate.

Dependable Locks owners David Peer (left) and Moshe Aharoni are the subject of a federal case. Photos courtesy of Pinellas County (Fla.) Sheriff’s Department. What Gold didn’t know was she had been routed to the call center in Clearwater, Florida -based Dependable Locks, which is now the subject of a federal case as well as multiple complaints filed by State attorneys general.

Gold says she was shocked when the two technicians who made the call presented her with a bill for $580.

“They said, ‘we need cash’ and of course all these bells are going off in my head,” she says, but she felt like she had no choice but to drive to an ATM with her teenage daughter and fork over the money. “I felt mostly a little embarrassed because I’d fallen for it,” Gold says.

Fake Locksmiths Operate Throughout the U.S.

In November 2009, two owners of Dependable were charged with allegedly using coercive and intimidating tactics to strong-arm customers into paying exorbitant fees for locksmith services from its network of technicians around the country.

The two were charged with mail and wire fraud, engaging in financial activities to promote unlawful activities and conspiracy to recruit and employ foreign nationals not authorized to work in the U.S. – charges that each carries a maximum sentence of 5 years in prison and fines up to $250,000. They are out on bail.

An affidavit supporting the complaint alleges Dependable managed a national network of more than 100 locksmith technicians and that many of them were non-immigrant Israeli citizens whose visas did not permit them to do this kind of work.

“This reaches throughout the United States,” said Doug Smith with the U.S. Postal Inspection Service at the time of the raid.

The federal complaint alleges that customers calling for locksmith services were routed to the Florida center, where they’d receive a price quote and get a local technician dispatched. Responding locksmiths allegedly would charge a much higher rate and were instructed to use various tactics with customers who balked at the price.

Technicians use techniques such as accusing the consumer who objects to the overcharge of ‘theft of services,’ threatening to call the police, withholding the customer’s keys or driver’s license or following the customer to an ATM machine to ensure payment,” according to the U.S. Attorney’s Office in Eastern Missouri, where the case is being prosecuted.

Representatives from the U.S. Postal Inspector’s Service and the U.S. Attorney’s Office declined to comment on the pending case. As of press time, no trial date had been set.

This year, Dependable made the ranks of Angie’s List’s top 10 worst contractors of the year. Attorneys general in Arizona, Massachusetts and Missouri have filed suit against the company, and complaints filed in the last year against other locksmith companies in Colorado, North Carolina and Wisconsin suggest the problem is widespread and ongoing.

John and his wife Patricia hired a locksmith they found on the Internet to fix a lever-style exterior door lock on their Minneapolis home.  He says Patricia was immediately concerned about whether the locksmith knew what he was doing.  “He didn’t seem to have the right tools, and he didn’t seem to know what was going on,” says Brogan, who joined Angie’s List after the experience. “He gave my wife a totally skeevy vibe.”

They were surprised to find the company printed on the $120 receipt was Dependable Locks of Florida.“We thought that was weird because we had called a local number,” Brogan says. Three days later, the lock mechanism fell off and the couple had to replace it.

How To Protect Yourself from a Fake Locksmith

There are a lot of ways consumers can protect themselves from shady operators. Don’t wait until an emergency arises to pick a locksmith.  If you’re stuck in a rainstorm in the parking lot of Walmart at three in the morning, you’re going to Google or call 411,” says Larry Friberg, a retired police officer who runs a website that tracks scams called Legallocksmiths.com. “You’re going to get a scammer.”

Joe Weiss of the A-rated Larry the Locksmith in Bronx, N.Y., recommends calling several local companies. “If they’re all in the same price range, it’s probably pretty accurate,” says Weiss, who is a registered locksmith with New York City’s Department of Consumer Affairs.  He says customers should expect to pay more if they need service in the middle of the night, but legitimate locksmiths will detail their costs up front. “If we go out and something is different from what we told them on the phone, we tell them the price before we do the work,” he says.

Be leery of any locksmith who shows up in an unmarked vehicle, acts cagey when questioned about the company or immediately recommends drilling out a lock. If you live in a State where locksmiths are required to be licensed, you should check their credentials with the appropriate agency.

McMullen of the locksmith’s association says his organization has pushed lawmakers in States without licensure to introduce legislation that would more closely regulate the industry, such as a Florida bill introduced in March that would require locksmiths to be licensed by the State’s Department of Agriculture and Consumer Services. But McMullen says legislation and enforcement are only part of the way to stop scammers. “The real solution to the problem is consumer awareness,” he says.